Today, 2/22, is the three month anniversary of the night Trudie died. I’ve been very sad this morning. I’m again grieving that the light of my life is now dark. The weather today is chilly and gloomy to boot (39 degrees F and raining). So I’ve been feeling and letting myself feel my sadness this day. I was told that anniversaries would trigger another “wave” of grief and it has. This too shall pass.

I talked to Charles a day or so ago and he says that Sari is settling right in on the farm. He says she shows a strong aversion to being in the house and she loves to romp around all their open land. I said that the aversion is probably due to all the time we had to keep her cooped up in our house while there was no one home.

He reports that they are extremely please that she gets along well their family members young and older alike. She gets along well with all their extended family who stop by to visit as well as all of their kids. He said she and the incumbent alpha-female have had a couple of fights. After the first fight one came away with a hurt paw and after the second fight the other came away with a hurt paw. So it seems that Sari and she have developed a mutual respect for each other and have called a truce. He said that Sari has formed friendships with younger males there and is just having a grand time.

I, in the mean time, am enjoying not having to worry about her needs for potty or companionship. The house does seem quieter and I’m adjusting fine to that.

I think we are both better off with this arrangement.

I decided to donate the 940 to a charity. Selling it myself would have been a lot of hassle. And this way I’ll get some tax credit when I file next year. Also, the charity plans to give it to a staff member who is need of transportation. So it really is a win-win move. I’ve not decided what to do with the 240 yet.

I’ve been accepted to go with a group of folks from my church to Bosnia Herzegovina. We will be there from Jul 27, 2008 to Aug 04, 2008. The details of the trip are here. You’ll be hearing more about it later… 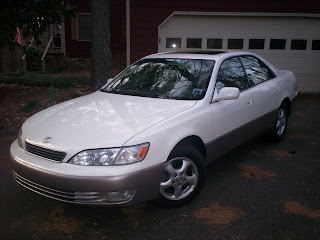 I now have a car that beeps! My sister sold me her former car. It is a great car. It is a 1998 Lexus ES 300. It’s such an upgrade from the Volvos I have been driving. I will donate or sell the Volvos. They have been faithful servants to our family now for many years. But, it is time to move on. When I drive it now I have a new sensation that I’ve not felt since I owned a 280 ZX. I feel pushed back in my seat when I push on the gas. WoW! And it gets just as good of gas mileage as the Volvos. Thank you, Millie!

Valentine’s Day was a rough one. I have had trouble the last two or three weeks avoiding the “sea-of-red” isles in the stores. It was such a strong reminder of my loss. Next year it will be less so. This too shall pass.